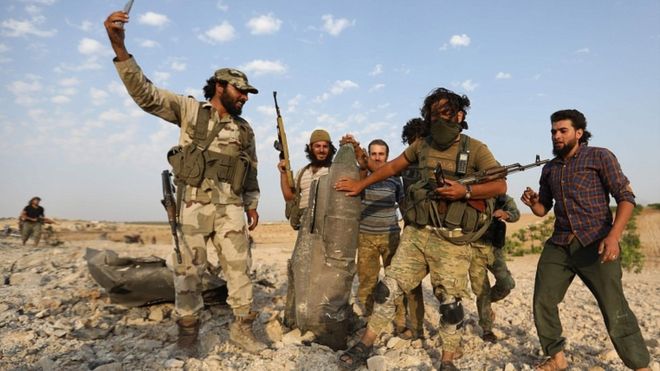 BBC | A Syrian government warplane has been shot down during fighting in the rebel-held northern province of Idlib.

It happened near the town of Khan Sheikhoun, which is being targeted in a Russian-backed government offensive.

Syrian state news agency Sana said that the warplane was hit by an anti-aircraft missile fired by militants.

HTS, the dominant faction in Idlib, did not say how it brought down the Russian-made Sukhoi warplane on Wednesday.

In a video published by its media arm Iba on Thursday, a man identifies himself as “Lieutenant Colonel Muhammad Ahmad Sulayman from the 70th Brigade”.

“My plane was shot down by mujahideen while I was carrying out my mission east of Khan Sheikhoun. I am currently with mujahideen,” he says, referring to the jihadist group.

The Syrian Observatory for Human Rights, a UK-based monitoring group, had earlier reported that the pilot had been captured by HTS militants.

Sana quoted a military source as saying that the pilot’s fate was unknown.

The government has stepped up its offensive in the region in recent months. Hundreds of civilians have been killed, and hundreds of thousands more driven from their homes.

Syria’s government, backed by Russia, is trying to recapture the region from rebels and jihadists.

Khan Sheikhoun, which was hit by a Sarin gas attack in 2017, is a strategically important town in the south of the province.

Government forces said they had seized new ground on Wednesday, advancing to within a few kilometres of Khan Sheikhoun, which has been controlled by rebels since 2014.

A rebel commander told Reuters news agency that the town was in “great danger”.

They are supposedly covered by a truce brokered in September by Russia and opposition-backer Turkey that spared the 2.7 million civilians living there from a major government offensive.

Civilian areas have been hit frequently since the Syrian government and Russia intensified their attacks earlier this year in response to what they said were repeated truce violations by jihadists linked to al-Qaeda, who dominate the region.