Coronavirus: 980 dead in UK hospitals in deadliest day of pandemic yet

Coronavirus: 980 dead in UK hospitals in deadliest day of pandemic yet 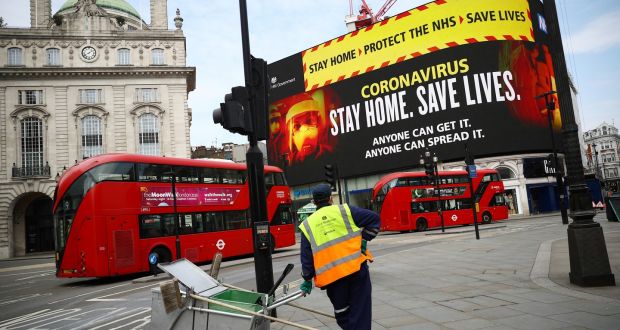 TheGuardian– The UK has recorded its worst daily fatality rate yet during the coronavirus crisis, a higher number in a single day than any experienced by Italy or Spain.

A record 980 people were announced to have died in UK hospitals in the preceding 24 hours, taking the total to 8,958.

That number is exceeded in Europe only by France, where 1,417 died in a single day – a figure that unlike the UK included deaths in care homes. Italy announced its record daily death toll of 971 almost two weeks ago, against Spain’s worst day of 950 coronavirus deaths.

While Europe’s worst-hit countries are now past the peak of the outbreak, the UK’s figures are expected to continue to rise for at least two more weeks.

Announcing the fatalities, the health secretary, Matt Hancock, said: “We never forget that behind this number, behind each one is a name, a loss, and a family that will never be the same again.”

He added: “This Easter will be another test of the nation’s resolve. It’s a time of year when people normally come together. But however warm the weather, however tempting your local beach or park, we need everyone to stay at home.”

The figures come on the day the global death toll from coronavirus approached 100,000.

The UK’s official daily death toll, which is calculated on a different timescale from separate figures announced in all four countries, exceeds Thursday’s daily total of 881 and the previous record tally of 938 announced on Wednesday.

The figures in England showed a particularly sharp rise in fatalities in the Midlands, where the number of victims rose by more than 84% from 124 to 229 in 24 hours. London remains the worst-hit region with 249 deaths.

The patients who died in England were aged between 27 and 100. All but 56 of them had underlying health conditions.

The latest data came after it was confirmed that coronavirus had claimed the life of a 10th NHS doctor. Dr Fayez Ayache had retired as a Suffolk GP but had been working part-time in North Clacton, Essex, until three weeks ago. He had also volunteered to help refugees from his native Syria. He died on Wednesday after being diagnosed with pneumonia and Covid-19.

Dr Sharif K Al-Ghazal, a consultant plastic surgeon at Bradford Royal Infirmary, paid tribute on behalf of the Syrian British Medical Society. He said: “Dr Fayez was a kind-hearted man who always went out of his way to assist his patients, even at great personal cost.”

His daughters Layla and Katie said: “He was an incredible and amazing doctor having worked as a GP, ENT consultant and surgeon in the NHS and private sector for over 40 years. We are truly devastated and will miss him dearly. He was a true foundation in our lives.”

Asked how many healthcare workers had died during the crisis at the daily Downing Street press briefing, Hancock passed the question to chief nursing officer Ruth May who said that internal numbers were available for nurses, midwives, healthcare assistants and doctors but that it would be “inappropriate for me to go into numbering them” without family permission.