Captain Tom has ‘enjoyed every second of this exciting adventure’

Captain Tom has ‘enjoyed every second of this exciting adventure’ 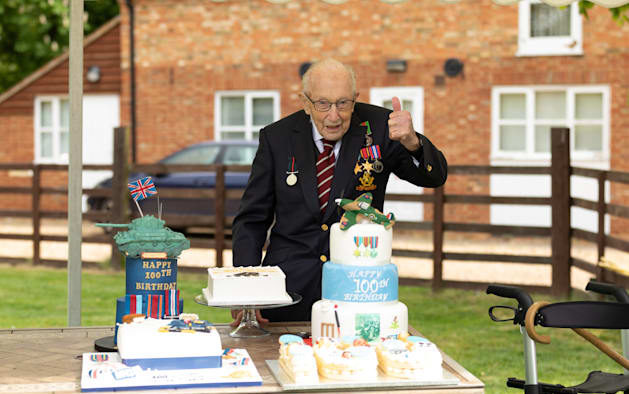 ExpressandStar – Captain Tom Moore said he has “enjoyed every second of this exciting adventure” as he celebrated his 100th birthday, having raised more than £31 million for the NHS.

The Second World War veteran’s JustGiving page is to close at midnight on Thursday, having achieved the total in little over three weeks, but he encouraged people to continue to donate to NHS Charities Together.

Captain Tom set out to walk 100 laps of his garden in Marston Moretaine in Bedfordshire before his 100th birthday and he completed the laps ahead of time.

His initial fundraising target was £1,000.

To mark his century he was made an honorary colonel and there were two military flypasts over his village – the first of a Spitfire and a Hurricane, and the second of a Wildcat and an Apache helicopter.

He has been sent more than 140,000 birthday cards, including a signed card from the Queen, and was sent a message by Prime Minister Boris Johnson.

Mr Johnson said: “Captain Tom, I know I speak for the whole country when I say ‘We wish you a very happy 100th birthday’.

“Your heroic efforts have lifted the spirits of the entire nation.”

Captain Tom, who is a cricket fan, has also been made an honorary member of the England cricket team.

He began his challenge to thank NHS staff who helped him after he was treated for a broken hip, and he thanked the public for their “very overwhelming” generosity.

“Reaching 100 with such interest in me and huge generosity from the public is very overwhelming.

“I felt a little frustrated and disappointed after I broke my hip and it knocked my confidence.

“However, the past three weeks have put a spring back in my step.

“I have renewed purpose and have thoroughly enjoyed every second of this exciting adventure, but I can’t keep walking forever.

“My legs may be tired, but my mind is racing and I’m hoping to be back very soon with other ways in which I can help people, help others.

“Please always remember ‘Tomorrow Will Be A Good Day’.”

By Thursday afternoon, hours before his donations page was due to close, he had raised £31.7m with more than 1.4 million supporters making donations.

Ellie Orton, chief executive of NHS Charities Together, said: “Captain Tom’s incredible dedication to our appeal has captured the hearts and minds of the UK, and rightly so – what he has achieved will make a lasting difference.

“We cannot thank him enough for all that he’s achieved and we wish him a very happy birthday, and look forward to continuing to ensure that what he’s done is used to improve the lives of the NHS staff and volunteers that are giving so much to their communities at the moment.”

Captain Tom has been awarded the Freedom of the City of London, and the postbox outside his village Post Office has been painted NHS blue in honour of his efforts.

الأوسمة :
المقالة السابقة
Amazon (AMZN) Stock Is a Winner, But How Much Higher Can It Go?